The patron saint of Bale is also known under his local name San Zulian. At a young age, he entered the Franciscan order and after completing his studies in philosophy and theology became a priest. He had lived in various Istrian monasteries, the longest time in a monastery just outside of Bale – the monastery of St Michael, where he passed away, according to the legend, somewhere between 1328 and 1367.

He lived an exemplary religious life in the monastery. He frequently preached all over Istrian towns and villages, administered sacraments and was known as the man who brought peace between repelling people. Many believers visited him at the monastery seeking advice and confessed their sins.

Artists usually depict him with a book and a cross in his hand because he was trying to bring all people peace. As a preacher, herald and missionary he carried out the motto of his spiritual leader St Francis – peace and wellbeing.

People have been worshipping him as a saint since his death. The people from Bale had chosen him to be their patron in 1477.

The Pope made him a saint in 1910 with a decree where he stated he was “virtuous in word and deed, incensed by heavenly love and full of ardour in saving souls…”

The Franciscan order left St Michael’s monastery at the beginning of the 16th century. The body of St Julian was left in the monastery church where believers continued to worship him. People transferred his powers to the parish church in 1597. In his honour a beautiful marble altar was elevated on Sept 29th 1592. An official document of the Poreč bishop Gašpar de Nigris testifies all of this. A new magnificent church was built in Bale in 1882 dedicated to the Virgin Mary and St Julian, as the stone written inscription testifies.

St Julian’s feast is being held on May 1st. It is also the official Day of the County of Bale.

The stone sarcophagus with the remains of Saint Julian is being kept in the crypt. Above the sarcophagus is a panel form 1645 which marks the spot where the saint’s body was found. 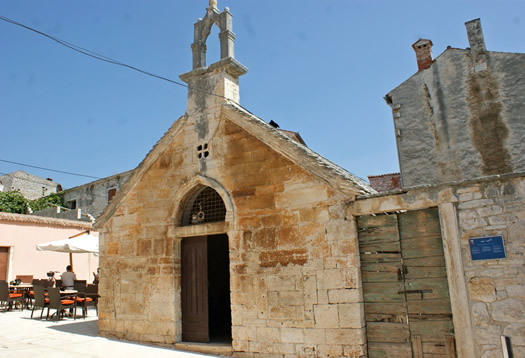