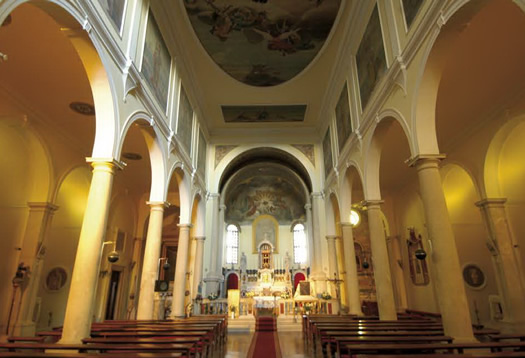 The Parish church of Visitation of Blessed Virgin Mary to St. Elizabeth was built inside the historic part of the town. The church that is standing there today was constructed with the special effort and devotion of the monsignor Paolo De Peris from 1879 to 1882 when the mayor was Tomaso Bembo. It is a big three-nave church with a crypt underneath the apse and numerous rooms beside the apse. It was built in 3 stages: the first church was an early middle age one-nave church with 3 prominent semi-circular apses from the 8th century. The Renaissance widening in 1588 made it into a bigger three-nave church of trapezoidal shape. In 1871 the church was destroyed to the grounds for the building of a new church. A rich sacral inventory is being kept in the church; stone sarcophagus from the 8th century decorated with a braiding, a wooden Romanesque crucifix form the 13th century, a wooden renaissance polyptych from the 15th century, a wooden sculpture of the Mon Perin Lady from the 15th century, valuable canvas paintings from the 17th and the 18th century, liturgical attire and equipment from the period between the 15th and the 19th century.

In front of the church is a bell tower, originally a medieval defence tower transformed into a bell tower during romanticism. In 1856 a floor with a loggia for bells was built. 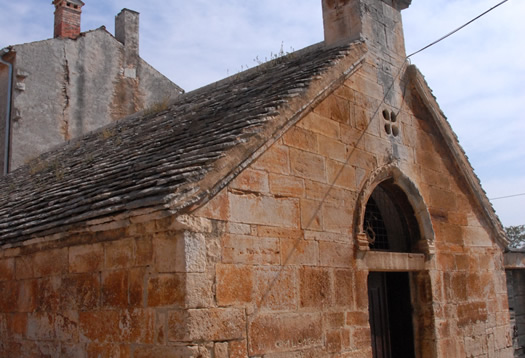 In the old town core, beside the parish church, the small Holy Spirit church found its place. It is an early gothic church built out of stone blocks with stone pavement-slates. The interior is decorated with frescoes by the master Albert from Constance from the second half of the 15th century. Along with the usual Christological cycle scenes, Albert painted the scene of the Mercy throne with saints and coronation of the Virgin.

This 15th century church was last renovated in the 20th century and lost its late-gothic characteristics. The church is situated by the cemetery. Its layout in the form of a Latin cross was formed in several stages. In the baroque period a sanctuary with a cross and side wings was built upon the older one-nave Romanesque church from the beginning of the 14th century. The church is the home of a carved wooden altar from the 16th century as well as the main altar made of stone and wood with the statue of St Anthony, the abbot. Late-gothic remains are preserved at the northern wall, as well as Glagolitic graffiti from the 15th and 16th centuries.

St Elias or the Immaculate Conception 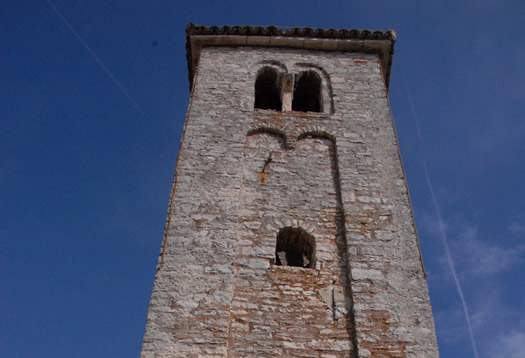 A pre Romanesque church of St Elias or the Immaculate Conception, known under the name Della Concetta is situated at the periphery of Bale, on the western part of the town. The front of the church has a 12-metre inbuilt bell-tower. The little church is rectangular, it is completely made of white stone, and it was renovated in the last century. 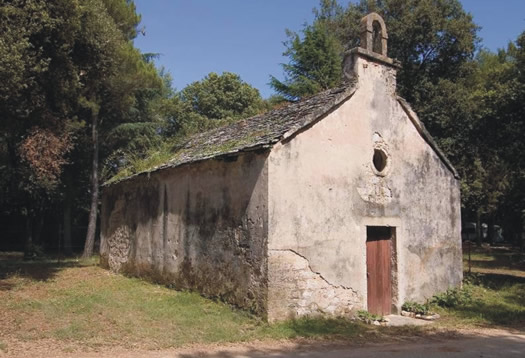 St. Jacob’s Church was constructed in the 14th century. It is a country chapel covered with stone slates. There is a distaff bell tower with one bell (from the 14th century) on the front. Graffiti of Austro-Hungarian soldiers who were stationed at the fortification San Benedetto – Monforno – Paravia are preserved on the facade. The church is dedicated to St. Jacob, called San Giacomo by the inhabitants of Bale.

Mon Perin, the company that manages the camps San Polo and Colone, renewed the church in 2014 and made a step forward in the tourism offer. Tourists that have chosen Bale as their summer vacation can attend mass in this extremely valuable sacral place. 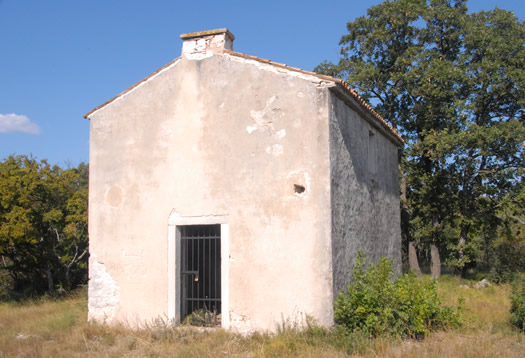 The one-nave church in ruins with the prominent semi-circular apse from the 13th and 14th century is situated on the north-eastern part of Bale on a hill.
It is dedicated to the patron saint of language and speech impairment- St. Catherine whose painting has been taken away. This church is popularly known as Santa Caterina. 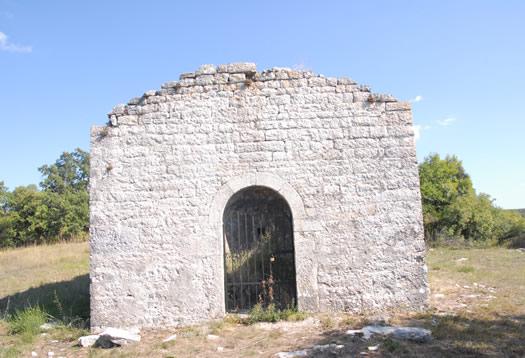 On a small hill on the north-eastern part of Bale a small field church from the 12th century is situated. It is dedicated to St. Andrew, patron saint of fishermen, known amongst the citizens as “Sant'Andre“. The eastern wall apse is the part that is preserved from the old church, while the side walls and front were built in the 19th century.

Assumption of the Virgin Mary

The Baroque church of the Assumption of the Virgin Mary was constructed in 1789 on the site of a Carolingian church and monastery complex from the 8th century. The church is also known by the name St.Mary from Bale and Madonna Alta.

The monastery was formed beside the ancient road that led from Porto Colonne to the hinterland of Bale. There was a big monastery church in its centre, constructed in several stages. The first church was a Carolingian three-nave basilica with three apses, polygonal from the outside, semi-circular from the inside, built in the 8th century. The naves were divided by a colonnade with colons carrying pre Romanesque capitals. The church was equipped with pre Romanesque stone liturgical furniture.

It was transformed in the 11th century – shortened by an arch span and a Romanesque bell tower was constructed at the south-eastern corner. Graves were found in the vestibule. A new Romanesque altar partition was set.

There was a smaller memorial chapel in the monastery complex. The frescoes painted chapel got a bell tower on its front in the 11 century. According to the legend, Alexander the III spent the night in the monastery in 1177 on his way from Dalmatia to Venice.

The monastery was knocked down in the 17th century. Colons and capitals of the mid-nave of the pre Romanesque church as well as parts of the liturgical furniture of the medieval church were used in the construction of the Baroque church. The complex has been systematically explored since 1995. Some of the furniture and capitals are being preserved in the lapidary crypt of the parish church in Bale.

Nativity of the Virgin Mary

This small church is situated in the vicinity of Bale, north from the road leading to Rovinj. It is also known by the name Madonna Piccola. It originates from the 8/9th century. It is a one-nave church with two apses where traces of original altars were found. A small niche is situated between the apses.

The church was thoroughly examined and reconstructed between 1992 and 1998. The stone liturgical furniture from the church is being kept in the crypt of the parish church in Bale. 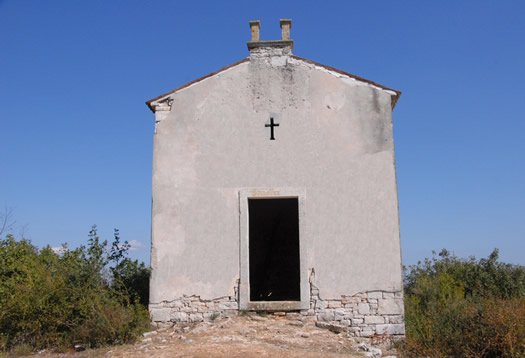 St. Michael’s Church or San Michele was erected on the remnants of an ancient monastery in 1855 by monsignor Medelin. The monastery was probably erected between the 7th and the 8th century, and it was first mentioned by Pope Alexander III. Passing through Bale in1177, the Pope granted some indulgences. Legend has it that the monastery was the place where Blessed Julian, patron saint of Bale, died between the year 1328 and 1367. A document from 1418 confirms the activity of the monastery, after which it was definitively abandoned by the Franciscans. The church and the monastery were built on the site of a prehistoric Bronze Age settlement. 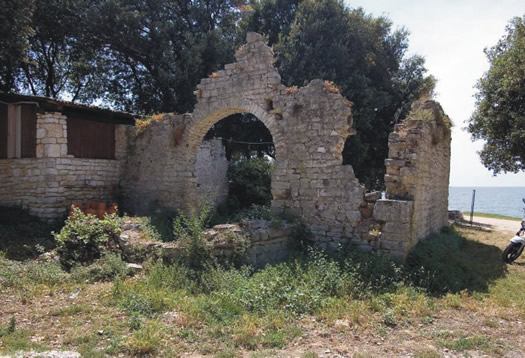 St. Paul’s Church, popularly known as San Polo, was erected on the remnants of an antique residential facility and outbuilding following the abandonment of an antique villa presumably constructed on the same site. It is a one-nave church with a semi-circular prominent apse. It was constructed by adapting an older (maybe even sacral) building from late antiquity period – erect at the end of 5th or beginning of the 6th century. On the eastern side an apse was leaned on the existing walls. The interior was tiled in stone and it is partly preserved. The stone sculpture found during exploration is exhibited in the crypt of the parish church.

By the Maslinica hill situated on the north of Bale, this church was erect in the period between the 10th and the 13th century. Only a part of a back wall was preserved.

St. Peter on the Top

The Poreč bishop in the 14th century initiated the construction of the Saint Peter on the top or the Todolon church. The old building was completely refurbished in 1904 when today's facade was made.

The St.Elisha church was built from the ground in 1967 according to the model of an older gothic – renaissance church. This older church was mentioned in documents from 1540. Plaster statues of St.Elisha and St. Theresa are kept in the church. A panel from the 16th century was built in the facade of the renewed church.

This church was constructed on the northern side of Bale in the 16th century and expanded in the 18th century. Windows and doors got new thresholds at the time. There is a bell tower with a semi-circular arch at the front.

In the vicinity of 3 puddles, on the right side of the road on the south-western part of Bale, a church supposedly erected in the 7th century can be found. The inhabitants call this church, dedicated to the Poreč martyr, St Mori in the local dialect. The one-nave church was constructed in three different time periods. A distaff from the last reconstruction was preserved at the front. There is a window from the first stage underneath it.

There is a devastated church dedicated to the martyrs Gervasius and Protasius on a small road by the Bembo stancija. Their bodies are laid in Bishop Ambrose's basilica in Milan. The people call it St Červar, in documents even San Selvaggio. It is thought to be erected somewhere after the 7th century. It was constructed from naturally layered stone, in a very skilful manner.

The church dedicated to the patron saint of children and seamen is situated on the northern periphery of Bale. It is today in ruins, but a one-nave Romanesque room is still well preserved.

This Romanesque church has been restored many times during the years. A canvas painting of St George is preserved, although damaged, as well as a wood-stone combination altar. 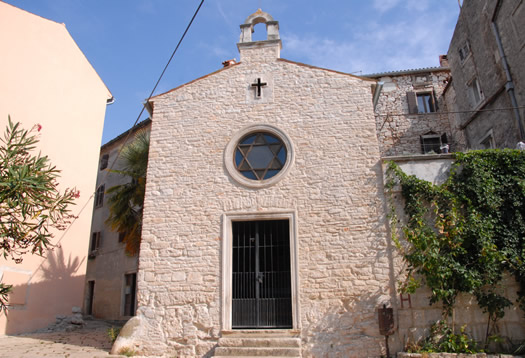 A church, probably from the Romanesque period, “hid“ between the houses in Bale. It is a one-nave church with an inscribed apse.

The church dedicated to the patron saint of pregnant women and mothers, St Anne, most probably erect in the Romanesque period has also found its place in Bale. It is a one-nave church.

The remains of this church, probably from the Romanesque period, are located on the southern side of the hill with the same name, not far from the Roman tank.

On the road Pula – Triest on the eastern side, not far from Golaš, is a church which was vaulted in gothic style. There are only ruins left to see today. 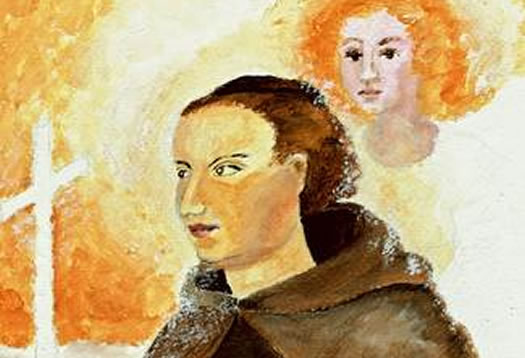